All you want to know about Cardiovascular diseases

WHAT ARE CARDIOVASCULAR DISEASES or CVDs?

Cardiovascular diseases (CVDs) are a group of disorders of the heart and blood vessels and they include:

Often, there are no symptoms of the underlying disease of the blood vessels and that’s why they are often silent killers. A heart attack or stroke may be the first and often final warning of an underlying disease.

Symptoms of a heart attack include:

In addition the person may experience difficulty in breathing or shortness of breath; feeling sick or vomiting; feeling light-headed or faint; breaking into a cold sweat; and becoming pale. Women are more likely to have shortness of breath, nausea, vomiting, and back or jaw pain.

The most common symptom of a stroke is sudden weakness of the face, arm, or leg, most often on one side of the body.

Other symptoms include sudden onset of:

The 7 most significant risk factors of cardiovascular diseases.

There are numerous risk factors associated with Cardiovascular diseases. Some of them, such as family history, cannot be modified while other risk factors like high blood pressure can be mitigated with the right nutrition

The most important behavioural risk factors of heart disease and stroke are unhealthy eating patterns, physical inactivity, tobacco use and alcohol consumption. The effects of behavioural risk factors may show up in individuals as raised blood pressure, raised blood glucose, raised blood lipids, and overweight and obesity. These “intermediate risks factors” can be measured via simple blood tests and are helping in indicating an increased risk of developing a heart attack, stroke, heart failure and other complications.

Studies suggest that the high levels of cortisol from long-term stress can increase blood cholesterol, triglycerides, blood sugar, and blood pressure. Cortisol is the body’s main stress hormone. It works in this way- more the stress, more is the Cortisol level. This stress can also cause changes that promote the buildup of plaque deposits in the arteries.

Approximately 40% of the risk for cardiovascular disease lies in hereditary factors and remains a non-modifiable risk factor.

High levels of Homocysteine can lead to hardening of the arteries and can also result in blood clot formation. In addition to being clinically useful as a measure of systemic inflammation, high CRP levels are indicative of CVDs risk as they are prominent markers of inflammation.

Haemochromatosis is an inherited condition where excessive levels of iron in the body gets absorbed, leading to iron overload. Over time, this overload leads to a build up of iron in different parts of the body, including the heart. Cardiomyopathy caused by haemochromatosis usually causes symptoms of heart failure.

“The connection between fatty liver and early signs of plaque in the coronary arteries is increasingly compelling,” says Dr. Tracey Simon, a hepatologist at Harvard-affiliated Massachusetts General Hospital (MGH) because of dangerous accumulation of fat in the liver. This overload can be due to chronic alcoholism or heavy metal ingestion.

This inflammatory process contributes to all stages of CVDs, from the development of atherosclerosis to end stage complications. It all starts from poor dietary habits like increased consumption of foods rich in saturated fats (meat and dairy products mainly) which leads to high levels of LDL-C. Low density lipoprotein cholesterol (LDL-C) is  also known as ‘bad’ cholesterol. It contributes to fatty buildups in arteries (atherosclerosis), thus narrowing them and increasing your risk for heart attack and other conditions.

Accumulation of LDL-C in the arteries has shown to trigger the inflammatory response by activating the pro-inflammatory markers, CRP and finally resulting in a heart attack or stroke. There are anti-inflammatory nutrients which aid in avoiding this process. 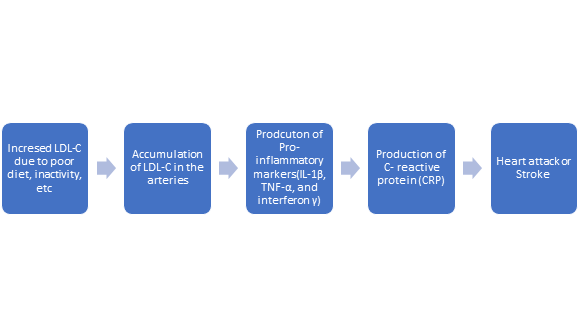 Nutrients that are of help

When we expose it to alcohol, tobacco smoke, radiation, pesticides or unhealthy foods, certain particles are formed called as- Free Radicals. These are highly reactive and damage our healthy cells. Antioxidants are substances that may protect your cells against free radicals. The benefitting nutrients that we are going to talk about, have protective effects for precisely this reason. The antioxidant and antiinflammatory properties of these nutrients make their consumption on a daily basis, much more important.

Studies have suggested that supplementation with vitamin E might reduce serum CRP levels.

Researchers have  shown that vitamin D-supplemented groups had lower levels of TNF-α, one of the proinflammatory markers.

An adequate  intake of folic cid, Vitamin B6 and Vitamin B12 could possibly reduce the risk of coronary heart disease by significant reduction in Homocysteine concentrations. High levels of Homocysteine can contribute to blood vessel damage and blood clots in your blood vessels.

However, when it comes to supplementing with nutrients, please consult a functional medicine/ functional nutrition specialist as you could easily overdose on some of these.

Bioactive compounds from food that are of help

Multiple bioactive compounds (omega-3 fatty acids, carotenoids, polyphemols or flavanoids) present in our food have beneficial effects on atherosclerosis development. All of them act to reduce levels of LDL-C and inflammatory biomarkers.

Polyunsaturated fatty acids (PUFAs) are a class that includes many important compounds, such as essential fatty acids (EFAs). EFAs are fats  that humans must ingest for good health because our bodies cannot make them. EFAs include- alpha-linolenic acid (ALA)/ omega-3 fatty acid, eicosapentaenoic acid (EPA), and docosahexaenoic acid (DHA) and have been reported as potential agents for prevention from formation of blood clots.

Carotenoids are a family of fat-dissolvable shades found chiefly in plants. Humans cannot produce them too, so they are important in their eating routine.  They are known to help in battling Atherosclerosis with their antioxidant and antiinflammatory properties. Following are some of the potent Carotenoids-

-Lycopene: This is present in red-colored fruits and vegetables, such as tomatoes, papaya, or watermelons among others. Studies suggest that lycopene might reduce CVD risk, particularly in early stages of atherosclerosis, preventing endothelial dysfunction and LDL accumulation.

-Beta-carotene: Beta-carotene is a standout amongst the most generally examined carotenoids. It is also known as Pro-Vitamin A. It’s found in carrot, orange, kale, spinach, turnip greens, apricot, and tomato, low serum carotenoid levels may reflect  high LDL-C levels which may further increase the risk of developing CVDs.

Polyphenols are a large class of organic compounds of plant origin, tend to be colourful and possess a wide range of health effects in the prevention of CVD.

Many studies have been focused on the antioxidant power of these polyphenols from most commonly consumed plant-derived foods, with very high values found for spices, herbs, berries, fruits, nuts, and vegetables.

Highest antioxidant value is reported for cranberries, blueberries, and blackberries among fruits and for celery, Ginkgo biloba, onions beans, artichokes, and russet potatoes among vegetables.

Flavanoid compounds that occur in a variety of foods such as citrus fruits, berries, onions, apples and legumes could also possibly reduce the risk of coronary heart disease. Flavonoids show high antioxidant, anti-inflammatory and antiallergic properties.

The role of certain nutrients is quite clear in CVDs. But the question is where do we get these nutrients from? The answer is right around the corner. Yes, foods and herbs.

When it comes to food, there is only one true saying- The whole, the healthier!

Some good plant based sources of all the important nutrients are:

However, for nutrients like Vitamin B12, Vitamin D and Co-enzyme Q10 there is need for supplementation because of scarcity of natural sources from food.

Herbs that help with heart health include the following